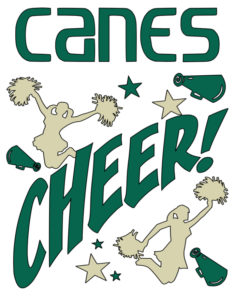 The Lady Canes will be Coordinated by Jessica Pink.  Jessica has coached at Middlebro High School, Carver High School and was the coordinator for the Carver Pop Warner programs. The Lady Canes are looking for more people with spirit and the love for cheering.  For anyone who is interested, they can register at www.marshfieldhurricanes.com/lady-canes

They Hurricanes are looking for local talent to help bring the championship home to Marshfield.  Two straight years the Canes have fell short to the Connecticut Mustangs in the ECFL Championship.  This year, they were plagued by turnovers and lost 6 fumbles and threw one interception for a total of 7 turnovers.  “When you play that sloppy you can’t expect to win”  Said Head Coach John Fossetti about the loss.  “We picked a heck of a day to play our worst game of the season”.  They Hurricanes finished the season 8-2 and North Division Champions for the second straight year.

“We have a great foundation, we are trying to build a great culture within the team and the town.”  Coach Fossetti says the goal for next year is to recruit solid people with great character, team guys.  “When building a team, whether in Football or in business, you want to make sure you have the right people, character guys, team guys”  said Fossetti, “1000 enemies outside the wall is better than 1 inside the walls.”

The Hurricanes are going into their third season in the East Coast Football League.  They continue to look to bring a winning tradition and their main goal is to win the E.C.F.L. championship next season.

If you are interested in becoming a part of the Hurricanes for their upcoming season you can register below:

The Hurricanes lost to the Connecticut Mustangs for a second straight year.  This year plagued by turnovers on a 18-3 loss.

They Mustangs opened the game with a touchdown, on the ensuing kickoff, the Hurricanes had their first of 7 turnovers and fumbled.  The Mustangs capitalized and made it 12-0 before the Canes Offense touched the field.  The Canes moved the ball, but couldn’t punch it in the end zone. They had to settle for their only points by Kicker Shane Carley in the 2nd quarter.  Right before halftime the Hurricanes had a chance to make it a 1 possession game but another turnover at the mustangs 10 yard line prevented it.

Starting with the ball the second half, the Canes couldn’t overcome their sloppiness and turned the ball over 3 more times.  One leading to another Mustangs TD to round out the scoring.

The Hurricanes overall had a great year.  For the second straight season they won the North Division Championship, they improved on their win total from 6 to 8 and are trending in the right direction.

They Canes did it with most of the same faces, but a few new faces really got the team to excel.  Leading Rusher, Chris McNally was one of the biggest additions.  With him and Tyrone Holley running the ball, it made for a 1-2 punch that was best in the league.

The defense once again was amazing.  Lead by LB’s Joe Amaral Jr and Jocko Devoe, they controlled the middle of the field while Defensive Ends Tyler Gomes and Pat Zadrozny maintained the edges and both had All Star years.

The Canes are looking to continue to build off their success this season and get some more quality recruits that could get them over the hump.

If you are interested in playing for the Hurricanes in 2019 you can email the at Marshfieldhurricanes@gmail.com or fill out the registration form below.